Larne Town Golf Club was founded in May 1928 by local business men. They purchased fifty acres of land at the top of The Roddens in Larne and here a nine hole course was designed and constructed by golf course architect Major CA MacKenzie. Amazingly the course was open for play the same year and competition began for two splendid trophies presented by Sir William Brown and Mr David Baine, trophies that are still played for today.

The Golf Club grew quickly in stature and membership and in 1930 a clubhouse was built and opened. This growth continued for several years necessitating the appointment of various employees, most notably in 1947 the appointment of a Club Professional, one Bob Walker from Donaghadee. One of the social high points of the age came in 1950 when the then Governor of Northern Ireland, the Earl of Granville and Lady Granville (sister of the late Queen Mother) visited the club.

Relocation
However, changes were afoot and in 1954, due to the industrial development of Larne, the Golf Club was forced to relocate to a more suitable site. The East Antrim Hospital Authority agreed to lease the club the land next to Cairndhu Hospital. This land was duly surveyed, the report was found to be favourable and a 99 year lease was signed with the existing course being sold to the Borough Council for£19,500. The new land was originally owned by Sir Thomas and Lady Dixon who took a great interest in botany; this would explain the great variety of trees and shrubs throughout the course.

Mr John SF Morrison, part of the Colt, Allison and Morrison firm of course architects, was commissioned to design the new course and work commenced in 1956. The exact date of the move from the Roddens is not recorded but the old clubhouse closed on 12th October 1957. The new course was declared a great success and was opened in May 1958.

Back 9 Opens
The sport of golf was growing quickly and soon it was decided that nine holes were not enough. A further 49 acres to the west of the clubhouse were leased for a period of twenty five years and Mr John SF Morrison was re-employed to construct another nine holes. Work again went well and the second nine holes were ready in 1961 and opened in 1963.

Throughout the transition from Larne Town Golf Club to Cairndhu Golf Club many members gave freely of their time and services, none more so than Mr WK Harbinson who provided men, machinery and materials for the benefit of the club. The Golfing Union of Ireland surveyed the course in 1964 and assessed it to be 6,071 yards long, par 70, Standard Scratch Score 69.

As the course matured the membership grew. It is recorded that in 1968 a record number of members played in Captains Day – 121. Other projects also took place such as the extension of the clubhouse with the addition of the function room in 1971.

Cairndhu was now fielding teams in most GUI competitions and in 1974 won its first major trophy, the prestigious Ulster Cup, sparking some serious celebrations that went on for days. In the same year the club hosted its first GUI qualifying event in the Pierce Purcell Foursomes.

First Pro Am
1976 saw the club’s first tentative steps into the world of the Pro Am, an event we now host every year. This first Pro Am, however, was to be the catalyst for the biggest event in the club’s history. The three-day Pro Am in 1981 drew a field from all over the world including Nick Price and Ian Woosnam, Major champions, and European Tour winners Roger Davis, Mark McNulty, Simon Owen, John O’Leary, Des Smyth and Christy O’Connor (Jnr).

Additions and improvement continued to the course with the installation of a watering system in 1986. Improvements were also carried out to the clubhouse with panoramic windows put in the bar area to maximise our stunning views.

Cairndhu established itself as a Championship venue in 1990 when it hosted the Ulster Boys, a very successful event won by Gerry Sproul from Rosses Point.

Modern Day
Over the years much has changed, we now own the entire course having bought the front nine from the Health Authorities and the rest from the Borough Council. Many alterations have been made to the course, clubhouse and storage facilities over the years; recently the restructuring and refurbishment of the Professional Shop, the office and the whole bar and television room area. In more recent years the Juvenile locker room has been refurbished and a Development Committee has been set up to design and implement development plans for the course and buildings.

There are however some things that have not changed and never will - the warm welcome afforded to visitors, the stunning views and a first class golf course.

No history of Cairndhu would be complete without significant reference to one man – Bob Walker.

Bob was born in 1920, one of ten children to Robert and Sarah Walker who lived in Donaghadee. Bob left school at 14 and for a while worked in a grocer's shop but his real passion, which he’d had from an early age, was for golf. It was not long before the professional Ernie Patterson took him on at Donaghadee Golf Club, where he learned how to make and mend golf clubs and developed the skills required to become a professional golfer including green keeping which was an essential requirement in those days.

The Second World War began and Bob was determined to do his bit. He enlisted in the Royal Air Force joining the military police and spent most of the war in the Middle East. It was here he met and fell in love with a young attractive Egyptian girl, Helen, known as Madge, whom he married. Bob and his new wife arrived home to Donaghadee in 1945, and during the next few years daughters, Joan and Betty were born making the imperative of Bob finding a job all the more important.

Mr Walker Joins Cairndhu
On July 20th, 1947 Bob was appointed golf professional to Larne Town Golf Club at the Craigyhill course. The accommodation was still difficult to come by and for the first few seasons in Larne he bunked down in the clubhouse, traveling home only at the weekends. In 1949 he was given the first of the aluminum bungalows being built beside the golf course and at last his family was together permanently. In those days green keeping was an essential part of the professional’s duties thus preventing him from getting the necessary practice to make his mark as a tournament professional.

However, there is little doubt of Bob’s natural golfing ability. He and Dr. Ken Maguire were runners-up in the Christie Flag. He took Fred Daly, Open Champion in 1947, to a tie hole in the semi-final of the Ulster Championship which Fred, at the height of his brilliant career, went on to win. Bob also played in the British Open at Hoylake in 1952 sponsored by a few club members. He recalls their generosity was such that he fared financially better than many of the higher placed professionals in the competition.

Head greenkeeper
In 1970 he took on the additional responsibility of head greenkeeper, a position he held for over 20 years. As if that was not enough he also did relief barman in the early evening shift for many years. Meadowbank to the right of the 9th fairway has been the Walker family home for the last 38 years and, appropriately, the 9th Hole has been renamed in recent times as “Bob’s Garden”.

Bob was awarded the British Empire Medal in the New Year's Honours List in 1992 for services to golf, which he received in person from the Lord Lieutenant at Hillsborough Castle. A tribute pro-am was held for Bob in 1987, voluntarily supported by his fellow professionals from all over Ireland including the great Christy O'Connor himself. and on the occasion of his 80th birthday, Ulster Television featured him on their sports programme.

Retirement
Bob retired as Club professional in 2004 having held the post for a mere 57 years. His last day in situ was the final day of the Pro-Am. When the event was over Bob, his successor Paul Russell, the Captain and Hugh Logue played the 9th hole as one last hurrah. For many people, their enduring image of Bob will be him striding up to the 9th green which was surrounded by applauding members and fellow professionals alike. With former Ryder Cup star Philip Walton caddying this was a fitting finale for a great man.

Bob was made an Honorary Lifetime Vice President of the Club in 2005 and his booming and infectious laugh rang around the Club for several years until he sadly began a steady decline into ill-health. Despite his best efforts, this proved to be one thing that he couldn’t overcome and he passed away peacefully on 8th January 2015.

The presence of senior officials and players from the Professional Golfers Association (Ireland) along with the huge number of Club members at his funeral was a true testament to the respect and affection in which he was held.

It was a send-off he truly deserved and was a fitting tribute to the man known as “Mr. Cairndhu”. 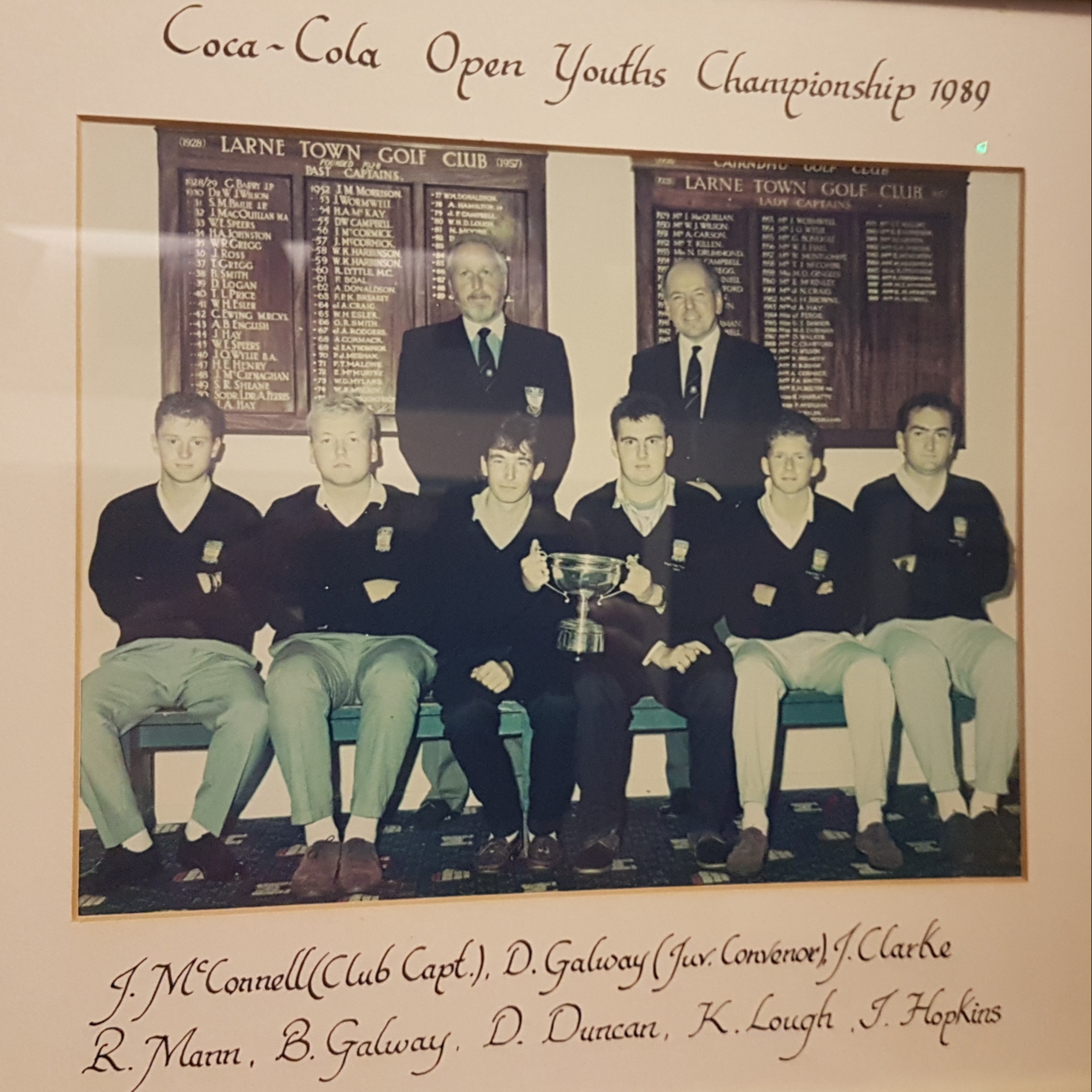 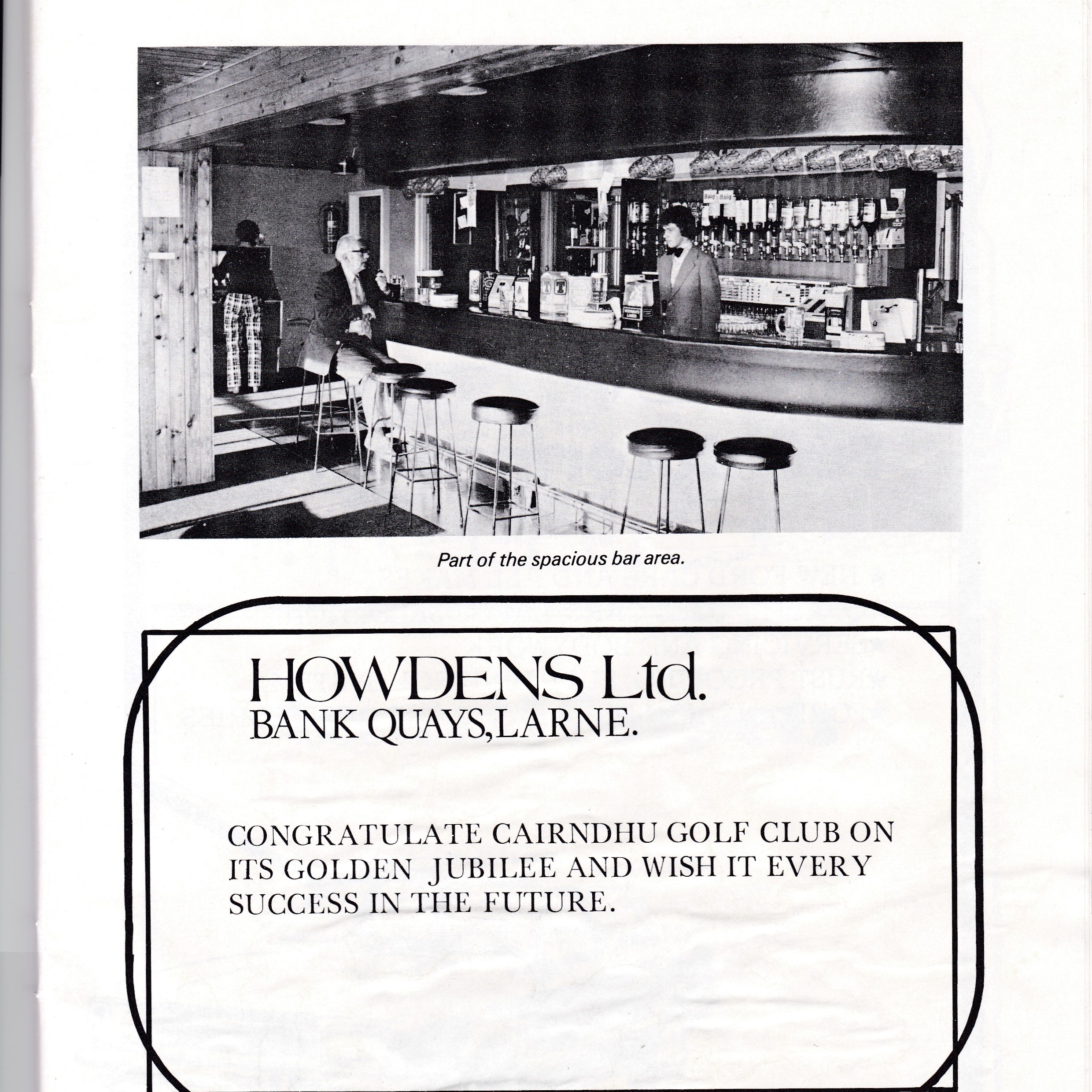 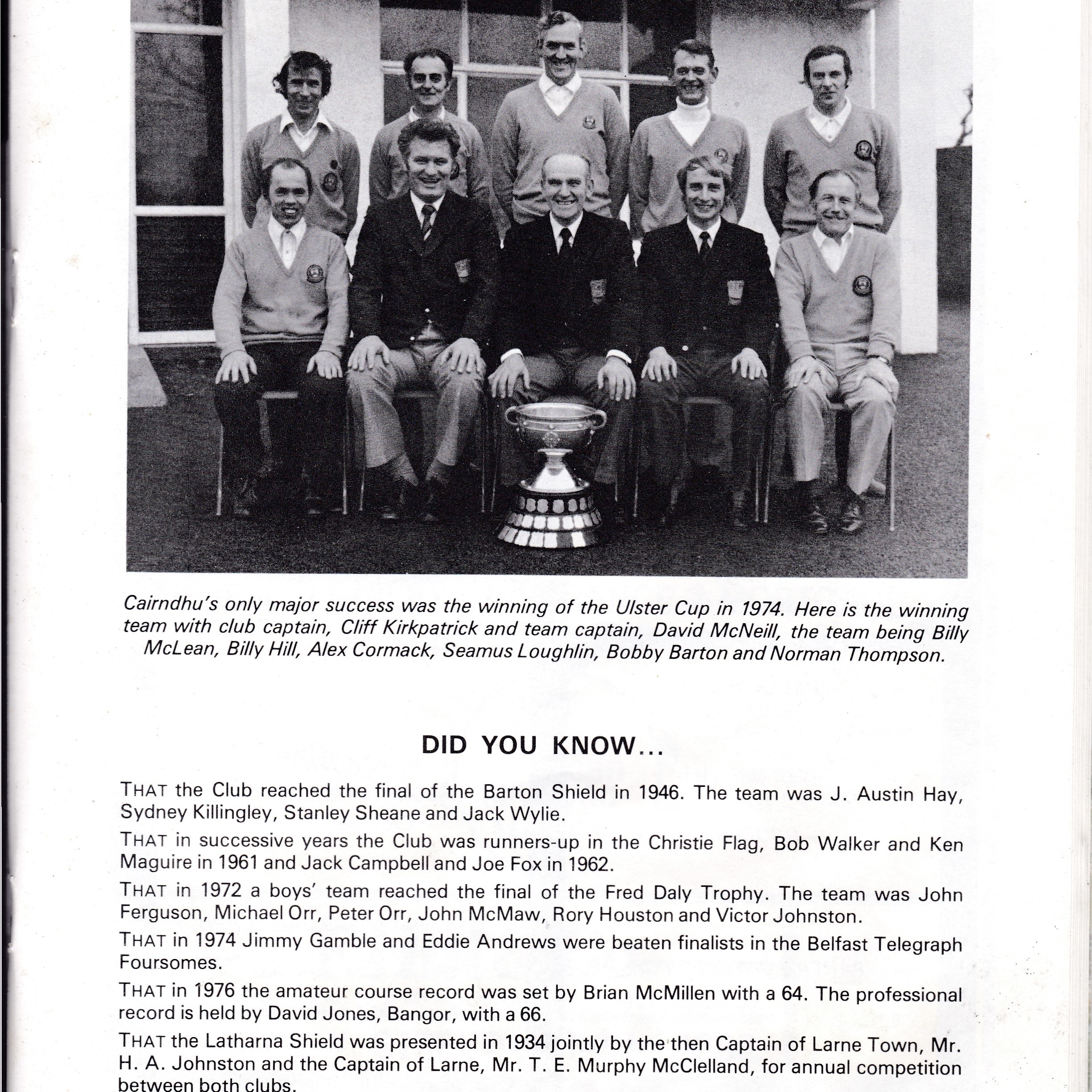 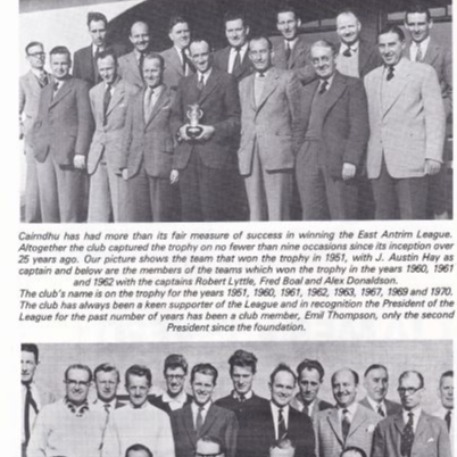 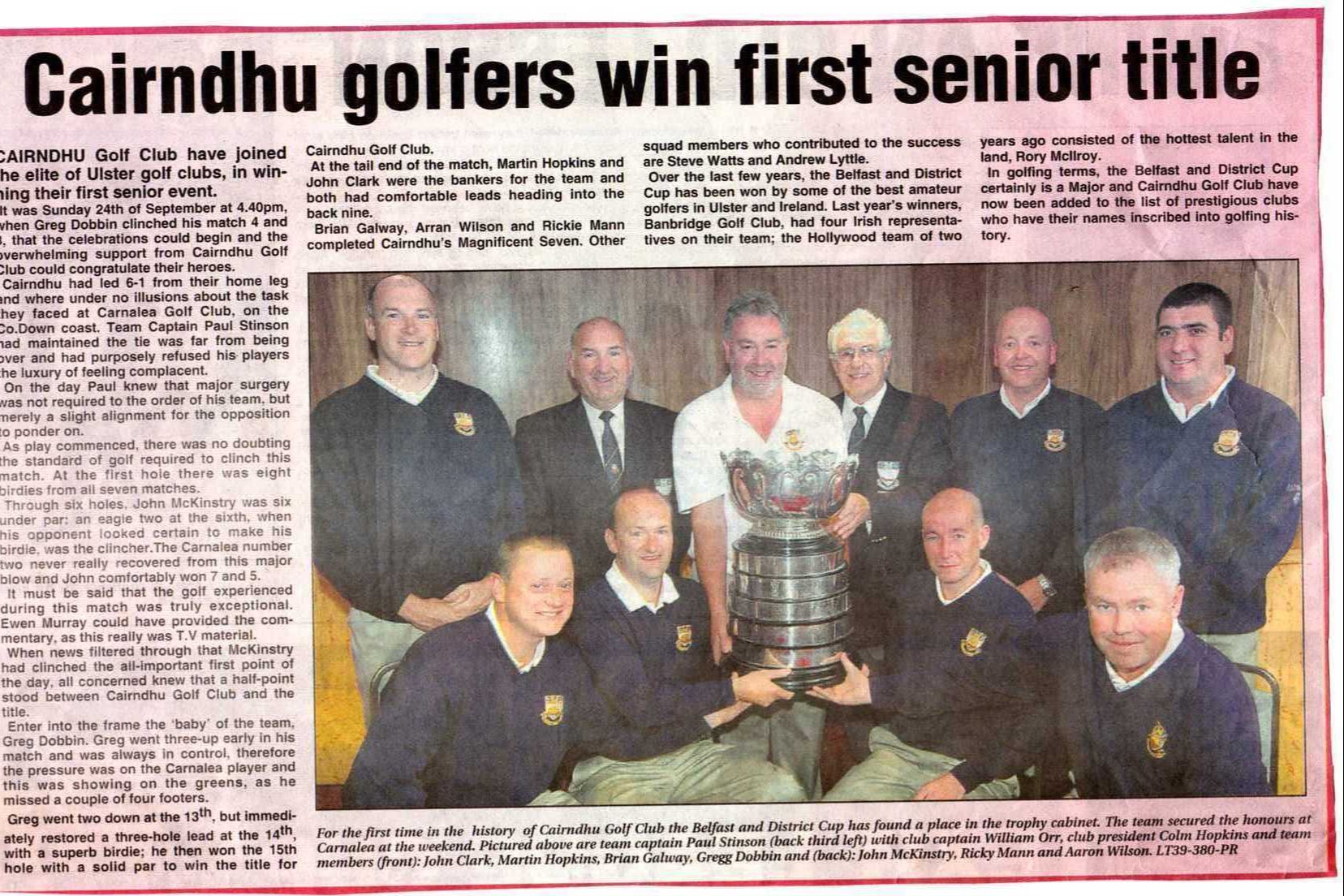 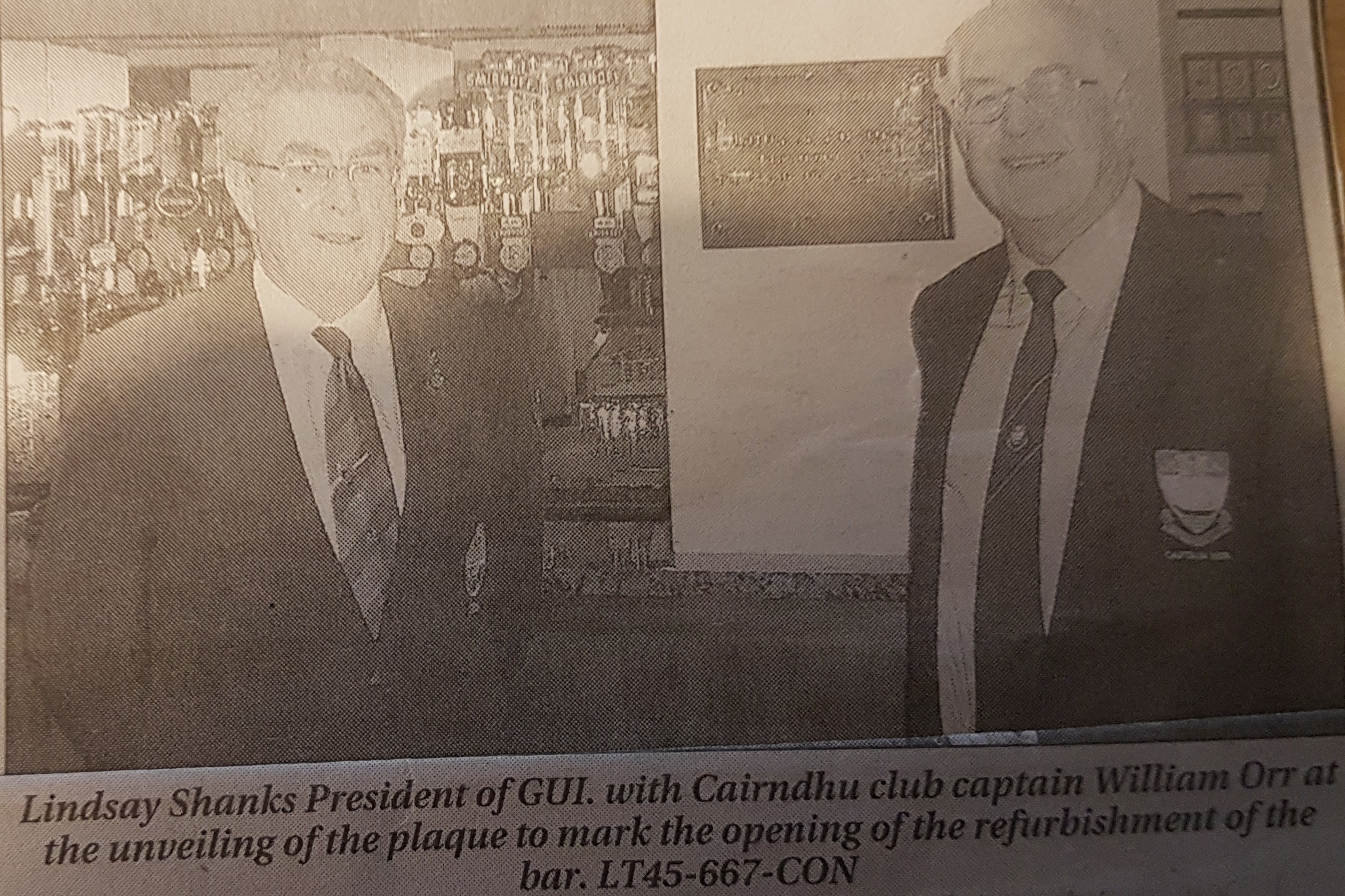 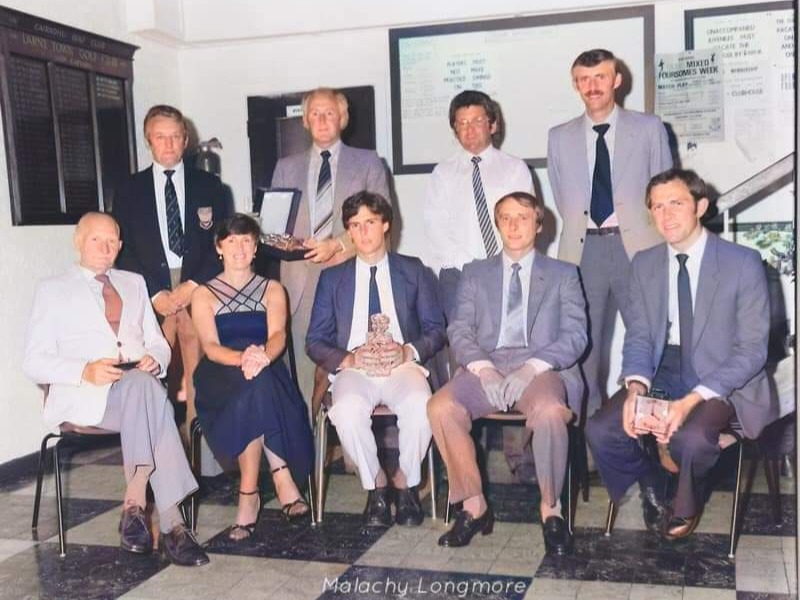 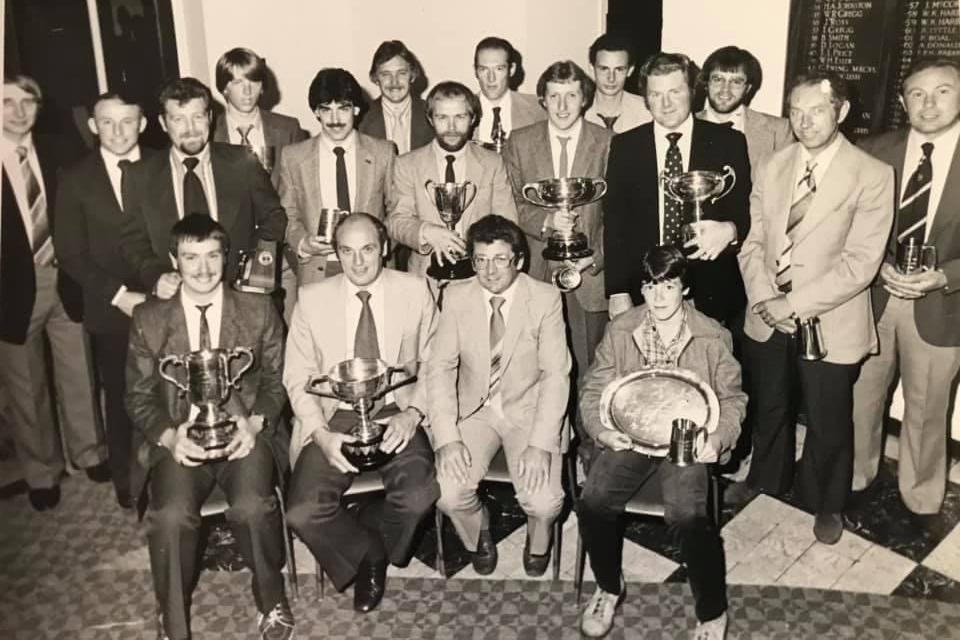 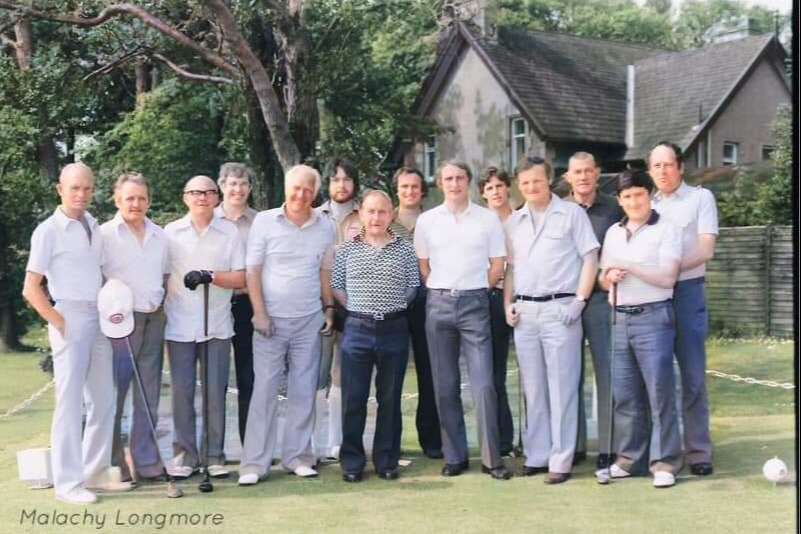 Cairndhu Golf Club was once land belonging to Sir Thomas and Lady Dixon. The house shown was originally occupied by Lord Dixon's chief herdsman. It was later in use as the club Pro-Shop, and in latter years has been used as a trolley storage room.

The second photo is of Cairndhu House in its former glory, which sits around 100 yards from the 9th tee. Cairndhu House was originally built as a summer residence in 1875. In 1918, Sir Thomas and Lady Dixon bought the property and during World War II it was used as a war hospital. The house was donated to the health authority in 1947 and turned into a convalescent home, which it remained until its closure in 1986. The third photo shows Cairndhu house from the air in the foreground, with the 9th hole and clubhouse visible above this.

Our scorecard has changed over the years. Here is how some of the older versions used to look like